Showing posts with the label bullish-engulfing
Show all 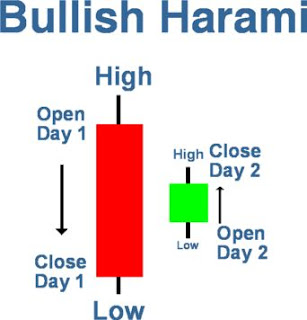 BULLISH  HARAMI CANDLESTICK PATTERN   www.FurtherGrow.in A candlestick chart pattern in which a large candlestick is followed by a smaller candlestick whose body is located within the vertical range of the larger body. In downtrends, the harami consists of a large red candle followed by a small green or red candle (usually green) that is within the previous session’s large real body. This pattern signifies that the immediately preceding trend may be concluding, and that the bulls and bears have called a truce. Description The Harami is a commonly observed phenomenon. The pattern is composed of a two candle formation in a down-trending market. The color first candle is the same as that of current trend. The first body in the pattern is longer than the second one. The open and the close occur inside the open and the close of the previous day. Its presence indicates that the trend is over. The Harami (meaning “pregnant” in Japanese) Candlestick Pattern is a reversal pat
2 comments
Location: India
Read more
More posts