Parametric Techniques on Other Distributions- THE KOLMOGOROV-SMIRNOV (K-S) TEST

Parametric Techniques on Other Distributions

The chi-square test is no doubt the most popular of all methods of comparing two distributions. Since many market-oriented applications other than the ones. However, the best test for our purposes may well be the K-S test. This very efficient test is applicable to unbinned distributions that are a function of a single independent variable. All cumulative density functions have a minimum value of 0 and a maximum value of 1. What goes on in between differentiates them. The K-S test measures a very simple variable, D, which is defined as the maximum absolute value of the difference between two distributions' cumulative density functions. To perform the K-S test is relatively simple. N objects are standardized and sorted in ascending order. 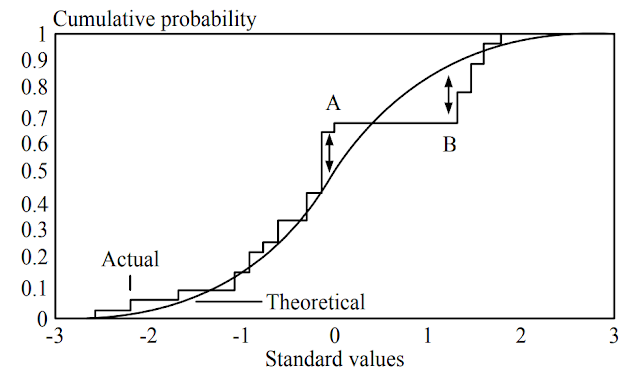 The lower the value of D, the more the two distributions are alike. We can readily convert the D value to a significance level by the following formula:

SIG = The significance level for a given D and N.
D = The K-S statistic.
N = The number of trades that the K-S statistic is determined over.
% = The modulus operator, the remainder from division. As it is used here, J % 2 yields the remainder when J is divided by 2.
EXP() = The exponential function.

There is no need to keep summing the values until J gets to infinity. The equation converges to a value. Once the convergence is obtained to a close enough user tolerance, there is no need to continue summing values.

To illustrate Equation by example. Suppose we had 100 trades that yielded a K-S statistic of .04:

So our first value is 1.452298. Now to this we will add the next pass through the equation, and as such we must increment J by 1 so that J now equals J2:

Adding this value of -.5560746 back into our running sum of 1.452298 gives us a new running sum of .8962234. We again increment J by 1, so it equals J3, and perform the equation. We take the resulting sum and add it to our running total of .8962234. We keep on doing this until we converge to a value within a close enough tolerance. For our example, this point of convergence will be right around .997, depending upon how many decimal places we want to be accurate to. This answer means that for 100 trades where the greatest value between the two distributions was .04, we can be 99.7% certain that the actual distribution was generated by the theoretical distribution function. In other words, we can be 99.7% certain that the theoretical distribution function represents the actual distribution. Incidentally, this is a very good significance level.

CREATING OUR OWN CHARACTERISTIC DISTRIBUTION FUNCTION

Now we will create this function. To begin with, consider the following equation:

This equation graphs as a general bell-shaped curve, symmetric about the X axis, as is shown in figure. 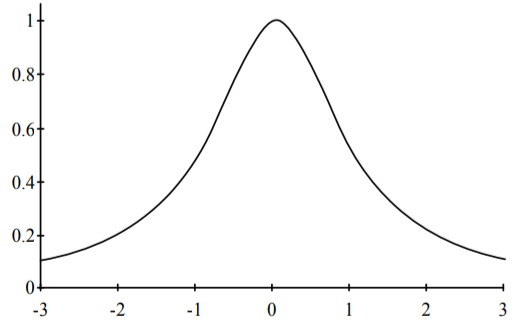 We will thus build from this general equation. The variable X can be thought of as the number of standard units we are either side of the mean, or Y axis. We can affect the first moment of this "distribution," the location, by adding a value to represent a change in location to X. Thus, the equation becomes:

Y = The ordinate of the characteristic function.
X = The standard value amount.
LOC = A variable representing the location, the first moment of the distribution.

Thus, if we wanted to alter location by moving it to the left by 1/2 of a standard unit, we would set LOC to -.5. 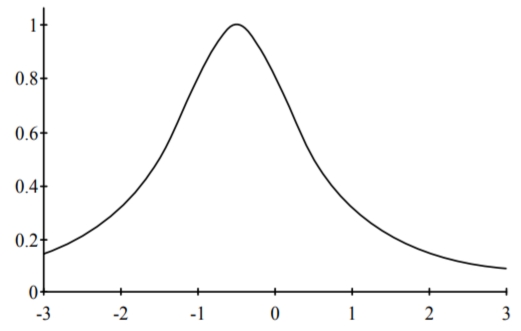 Likewise, if we wanted to shift location to the right, we would use a positive value for the LOC variable. Keeping LOC at zero will result in no shift in location. 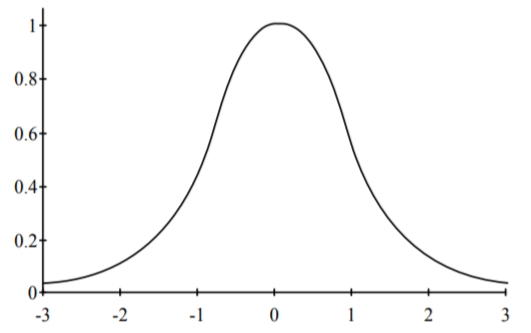 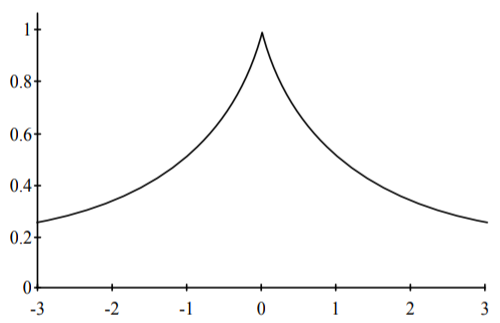 So that we do not run into problems with irrational numbers when KURT<1, we will use the absolute value of the coefficient in the denominator. This does not affect the shape of the curve. Thus, we can rewrite equation as:

We can put a multiplier on the coefficient in the denominator to allow us to control the scale, the second moment of the distribution. Thus, our characteristic function has now become: 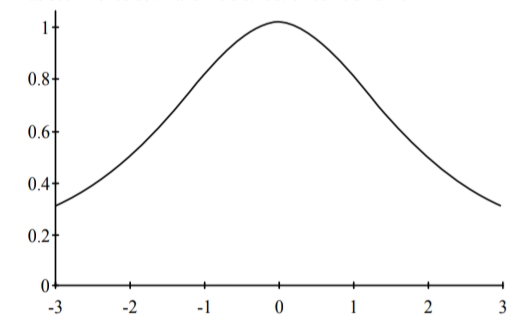 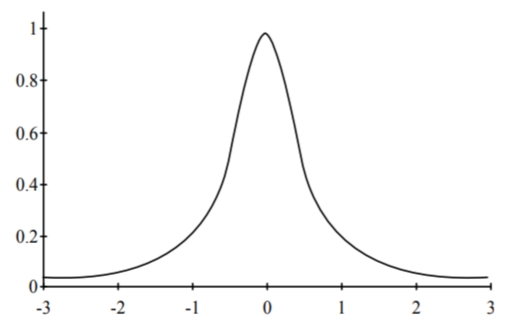 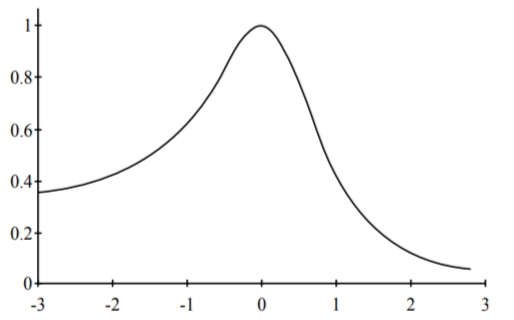 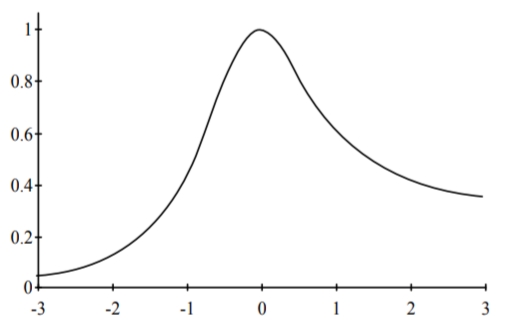 A few important notes on the four parameters LOC, SCALE, SKEW, and KURT. With the exception of the variable LOC, the other three variables are nondimensional - that is, their values are pure numbers which have meaning only in a relative context, characterizing the shape of the distribution and are relevant only to this distribution. Furthermore, the parameter values are not the same values you would get if you employed any of the standard measuring techniques detailed in "Descriptive Measures of Distributions".

For instance, if you determined one of Pearson's coefficients of skewness on a set of data, it would not be the same value that you would use for the variable SKEW in the adjustable distributions here. The values for the four variables are unique to our distribution and have meaning only in a relative context. Also of importance is the range that the variables can take. The SCALE. variable must always be positive with no upper bound, and likewise with KURT. In application, though, you will generally use values between .5 and 3, and in extreme cases between .05 and 5. However, you can use values beyond these extremes, so long as they are greater than zero.

FITTING THE PARAMETERS OF THE DISTRIBUTION

Just as with the process for finding our optimal f on the Normal Distribution, we must convert our raw trades data over to standard units. We do this by first subtracting the mean from each trade, then dividing by the population standard deviation. From this point forward, we will be working with the data in standard units rather than in its raw form. After we have our trades in standard values, we can sort them in ascending order. With our trades data arranged this way, we will be able to perform the K-S test on it.

Our objective now is to find what values for LOC, SCALE, SKEW, and KURT best fit our actual trades distribution. To determine this "best fit" we rely on the K-S test. We estimate the parameter values by employing the "twentieth-century brute force technique." We run every combination for KURT from 3 to .5 by -.1. We also run every combination for SCALE from 3 to .5 by -.1, For the time being we leave LOC and SKEW at 0. Thus, we are going to run the following combinations:
LOC      SCALE     SKEW           KURT 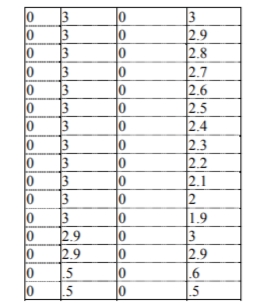 Thus, since Equation gives us the first derivative to the integral, we define Equation as N'(X). Often you may not be able to derive the integral of a function, even if you are proficient in calculus. Therefore, rather than determining the integral to Equation, we are going to rely on a different technique, one that, although a bit more labor intensive, is hardier than the technique of finding the integral. The respective probabilities can always be estimated for any point on the function's characteristic line by making the distribution be a series of many bars. Then, for any given bar on the distribution, you can calculate the probability associated at that bar by taking the sum of the areas of all those bars to the left of your bar, including your bar, and dividing it by the sum of the areas of all the bars in the distribution. The more bars you use, the more accurate your estimated probabilities will be.

If you could use an infinite number of bars, your estimate would be exact. We now discuss the procedure for finding the areas under our adjustable distribution by way of an example. Assume we wish to find probabilities associated with every .1 increment in standard values from -3 to +3 sigmas of our adjustable distribution. Notice that our table starts at -5 standard units and ends at +5 standard units, the reason being that you should begin and end 2 sigmas beyond the bounding parameters to get more accurate results. Therefore, we begin our table at -5 sigmas and end it at +5 sigmas. Notice that X represents the number of standard units that we are away from the mean. This is then followed by the four parameter values. The next column is the N'(X) column, the height of the curve at point X given these parameter values. N'(X) is calculated as equation. 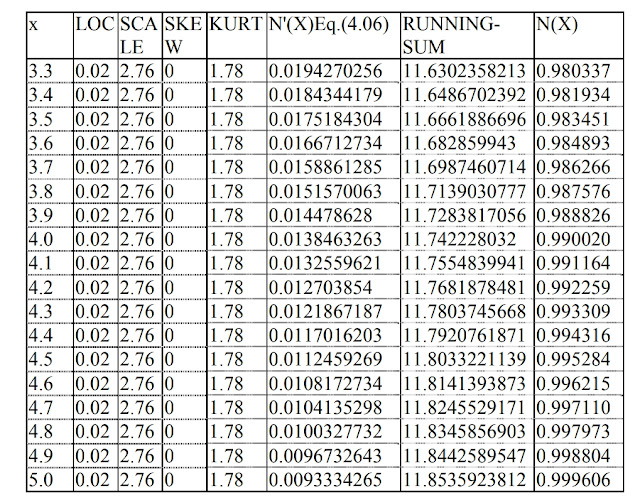 Thus, substituting 1 for C in Equation :

Thus, at the point X = -3, the N'(X) value is .02243444681. (Notice that we calculate an N'(X) column, which corresponds to every value of X). The next step we must perform, the next column, is the running sum of the N'(X)'s as we advance up through the X's. This is straight forward enough. Now we calculate the N(X) column, the resultant probabilities associated with each value of X, for the given parameter values. To do this, we must perform equation :

A word on how to determine your bounding parameters in actual practice-that is, how many sigmas either side of the mean you should go in determining your probabilities for our adjustable distribution. In our example we were using 3 sigmas either side of the mean, but in reality you must use the absolute value of the farthest point from the mean. For our 232-trade example, the extreme left standard value is -2.96 standard units and the extreme right  is 6.935321 standard units. Since 6.93 is greater than ABS(-2.96), we must take the 6.935321. Now, we add at least 2 sigmas to this value, for the sake of accuracy, and construct probabilities for a distribution from -8.94 to +8.94 sigmas. Since we want a good deal of accuracy, we will use a step increment of .01. Therefore, we will figure probabilities for standard values of:

Now, the last thing we must do before we can actually perform our K-S statistic is to round the actual standard values of the sorted trades to the nearest .01. For example, the value 6.935321 will not have a corresponding theoretical probability associated with it, since it is in between the step values 6.93 and 6.94. Since 6.94 is closer to 6.935321, we round 6.935321 to 6.94. Before we can begin the procedure of optimizing our adjustable distribution parameters to the actual distribution by employing the K-S test, we must round our actual sorted standardized trades to the nearest step increment.

In lieu of rounding the standard values of the trades to the nearest Xth decimal place you can use linear interpolation on your table of cumulative probabilities to derive probabilities corresponding to the actual standard values of the trades. For more on linear interpolation, consult a good statistics book, such as some of the ones suggested in the bibliography or Commodity Market Money Management by Fred Gehm. Thus far, we have been optimizing only for the best-fitting KURT and SCALE values. Logically, it would seem that if we standardized our data, as we have, then the LOC parameter should be kept at 0 and the SCALE parameter should be kept at 1. This is not necessarily true, as the true location of the distribution may not be the arithmetic mean, and the true optimal value for scale may not be at 1.