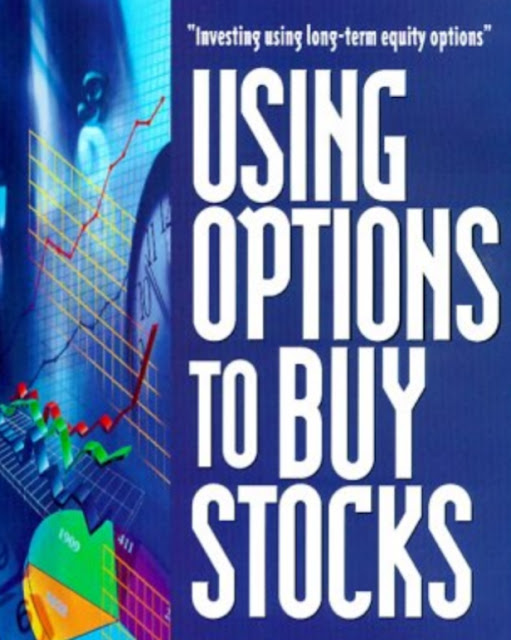 To begin, suppose that:

Further, let h be given by:

Then the probability of winding up in the money by the expiration date for a put option is given by:

The probability of winding up in the money by the expiration date for a call option is given by:

The integral is the standard normal distribution, where

As an example, consider the case of an at-the-money put where the stock price P is the same as the exercise price S. The log of 1 is zero, so the formula for now becomes:

What Equation is that other things being equal, the higher the annual dividend rate, the more likely it is that a LEAP put will wind up in the money. This is a natural consequence of the fact that the effect of dividends is to reduce the value of the underlying stock. Consider a case in which the volatility is 0.3, the risk-free interest rate r is 6 percent, and the annualized dividend rate δ is 1.5 percent. In this situation is zero, and the integral in either is 0.5.

Looking at the six inputs to the stock price, strike price, interest rate, expiration date, and dividend rate are all known variables. The unknown variable is the volatility, and estimates of it must be prepared based on the recent price history of the underlying stock. A major assumption underlying most option-pricing models is that prices are normally distributed about the mean.

In descriptive terms, this means that if a stock is currently at $20 a share, it is just as likely to double and go to $40 as it is to be cut in half and wind up at $10 a share. In keeping with this assumption, annual volatility is computed by taking a time series of closing prices Pi where i runs from 1 to N and thencalculating the logarithmic change ratios xi = ln (pi/pi-1). The mean ratio is calculated as:

Note that the mean logarithmic change ratio depends solely on the ratio of the last term to the first term in the series, pN/p0.

The variance and standard deviation about the mean are calculated as:

If the prices pi have been collected every d (trading) days, the annualized volatility is calculated as the adjusted standard deviation, as follows: 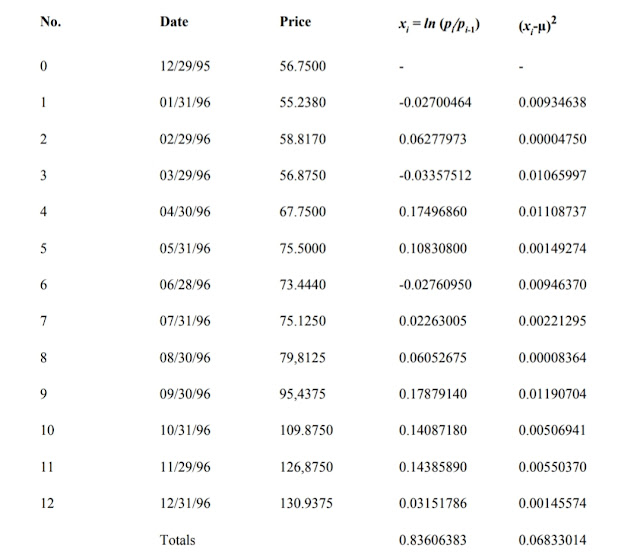 Table illustrates how each of these variables is calculated from a specified price history. The example chosen employs the month-end closing prices for Intel Corporation for the year 1996.

The annualized volatility is 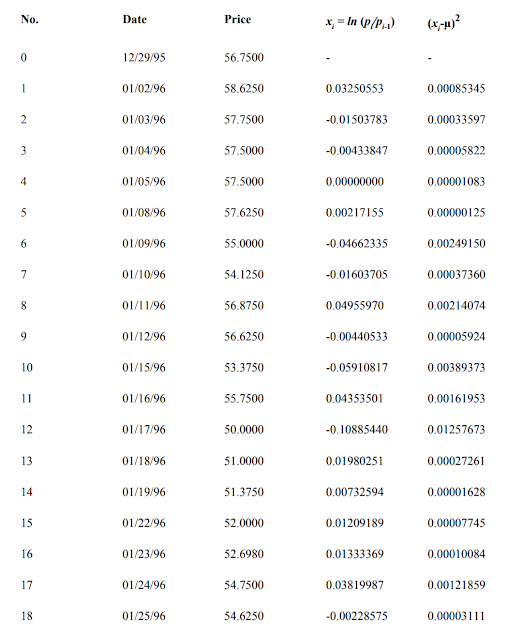 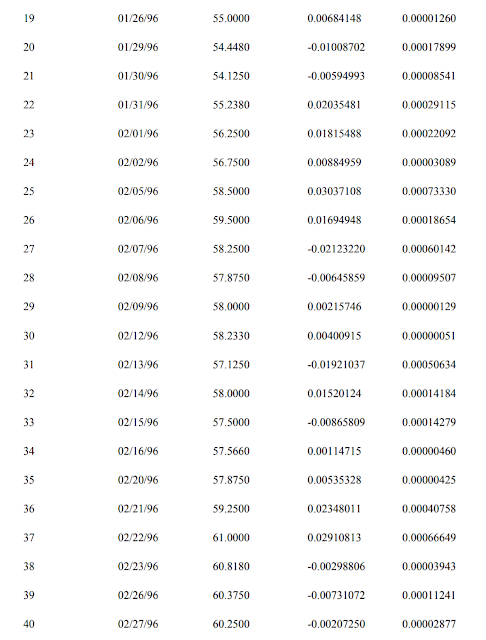 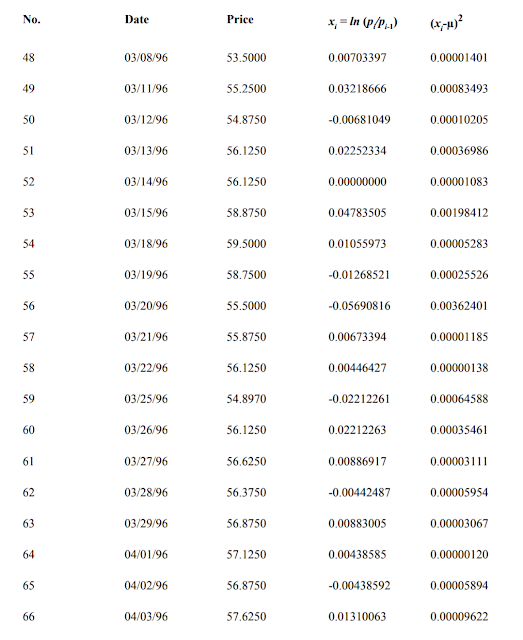 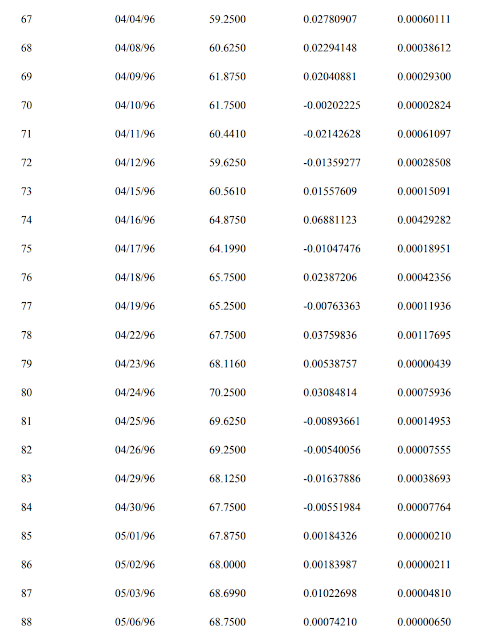 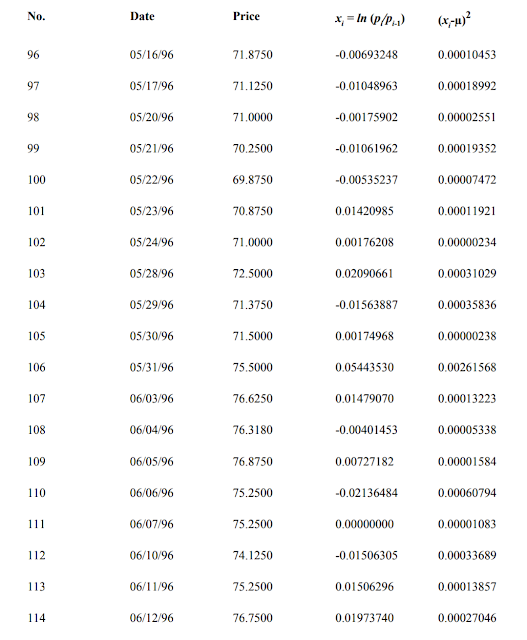 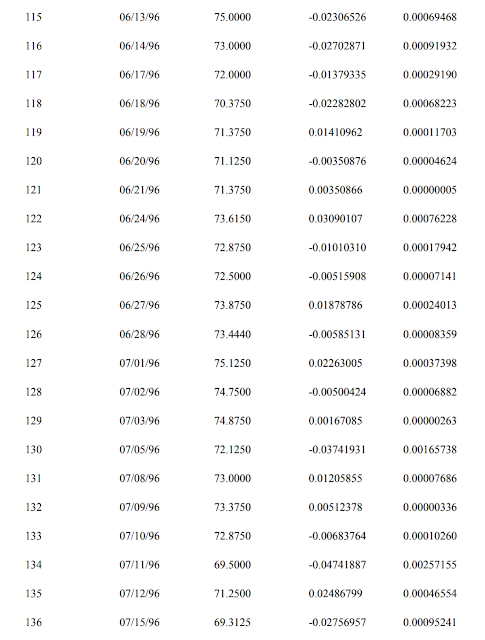 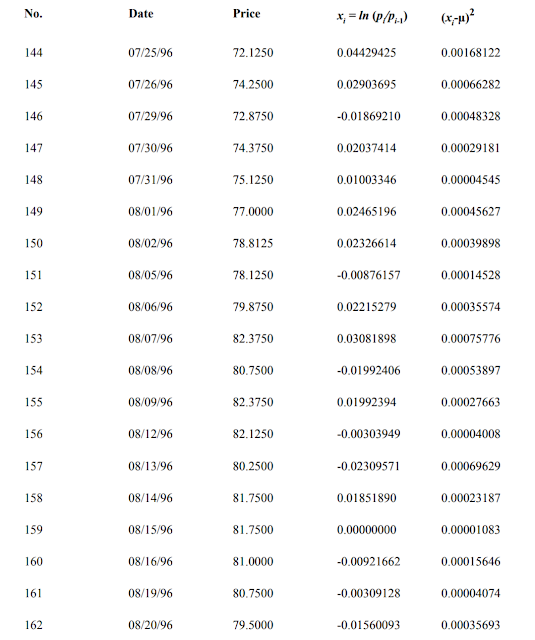 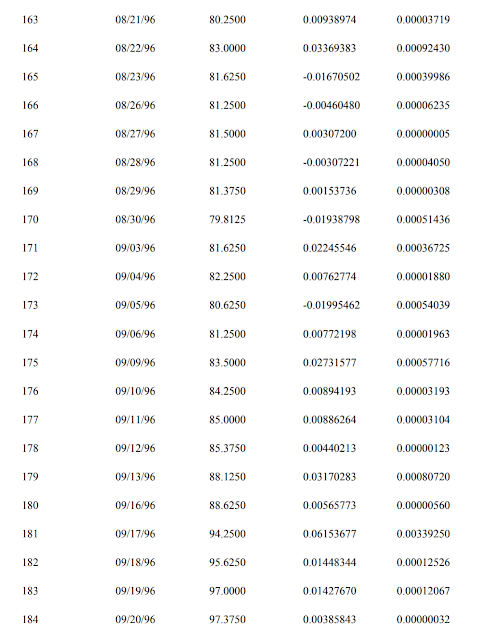 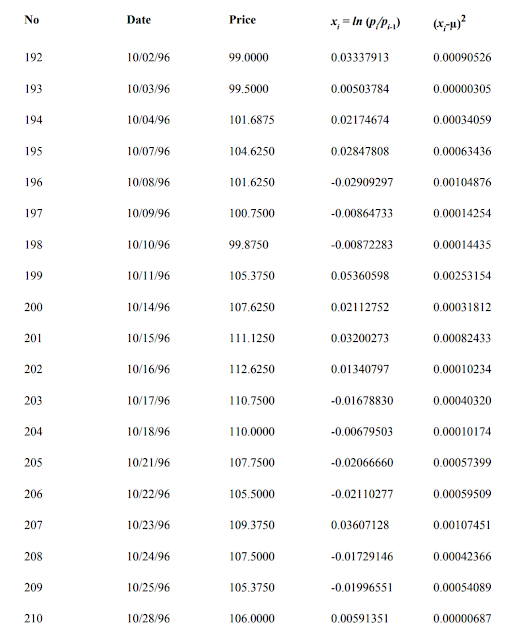 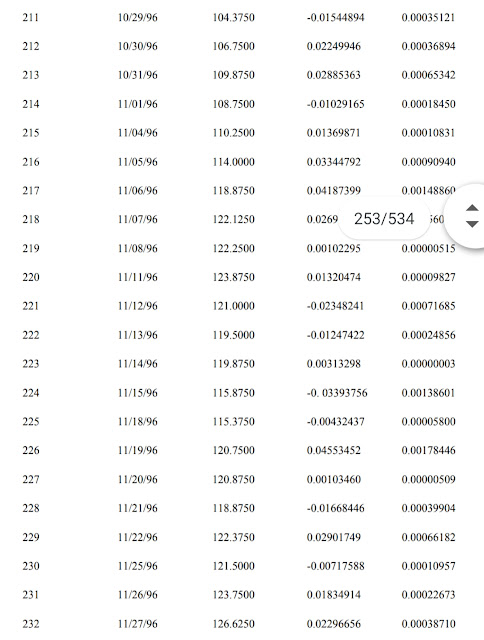 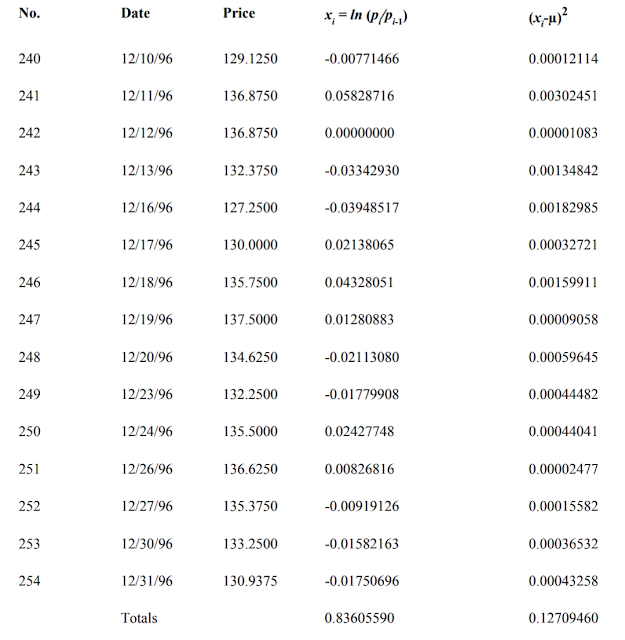 The annualized volatility is

The difference in the estimated annualized volatility brought about by using daily versus monthly data is seen to be significant and is the result of an insufficient sample size when monthly data are used. The next step in the procedure is to calculate the value of the normal distribution.

Although it is possible to use tables and interpolation to arrive at values of N(x), it is often easier to use some sort of curve-fitting formula. There are many such formulas to choose from, depending on whether the fit between the approximation and the exact distribution is to be more precise in the central or the outlying portions (the tails) of the normal distribution. A commonly used approximation for the normal distribution.

As mentioned earlier, long-term growth prospects in the earnings and in the corresponding stock price ordinarily have no effect on the price of a put or call option. This remarkable fact was noted by Cox and Rubenstein in their monumental book on option markets. Little emphasis was placed on this phenomenon, however, because of the relatively short expiration dates that existed on options at the time. To see why this must be the case, let's first consider a numerical example. It will be the first one examined where I will allow prices to rise at an additional 1 percent a month.

The annualized volatility is:

Because the volatility is the same as before, the put and call premiums for the same stock and exercise prices, expiration date, and risk-free interest rate are therefore unchanged. In general, suppose the growth-adjusted prices are given by qi = pi × (1+f)i, where f is the daily, monthly or annual inflation rate. The adjusted logarithmic change ratios are x'i = ln (qi /qi-1) = ln(1+f) + 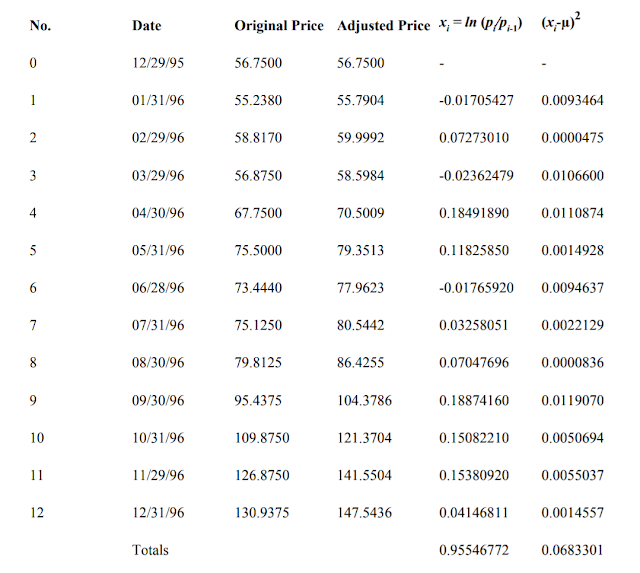 As has just been demonstrated, the effect of earnings growth on stock price is ordinarily not reflected in option premiums. Earnings growth must, however, affect the chances that a given put or call will wind up in or out of the money. This effect was ignored in the past because of the relatively short durations of standard options. When it comes to LEAPS, the effect of earnings growth can be significant because of expiration up to two and a half years away. If we denote the annual growth rate in the stock price α, by the expected stock price at expiration is going to be Pe α. If this term is used instead of the stock price at the inception of the option, the formula for h becomes:

So let's go back to the original example of an at-the-money LEAP put for which this time the formula for is given by:

Shows that other things being equal, the higher the growth rate, the less likely it is that a LEAP put will wind up in the money. For the specific case where the volatility is 0.3, the risk-free interest rate r is 6 percent, and the annualized dividend rate δis 1.5 percent, the expression for becomes . For a growth rate of a modest 10 percent per year, and an expiration date 2.5 years away, is -0.527, for which the integral is almost exactly 0.300. Thus, the chance of such an at-the-money put (or call) winding up in the money at expiration under these circumstances is just 30 percent, substantially less than the 50 percent probability of winding up in the money had the growth rate not been taken into account.

As mentioned earlier, showing the probability of LEAP puts winding up in the money for a wide range of parameters. Of particular interest is the fact that these probabilities for the five independent growth rates of zero, 5 percent, 10 percent, 15 percent, and 20 percent. It is thus possible to see the effect that earnings growth will have on LEAP puts that were initially out of the money, at the money, or even in the money.