WHAT ARE CURRENCY CORRELATIONS AND HOW DO TRADERS USE THEM?

By rahul roy - July 25, 2019
WHAT ARE CURRENCY CORRELATIONS
AND HOW DO
TRADERS USE THEM? 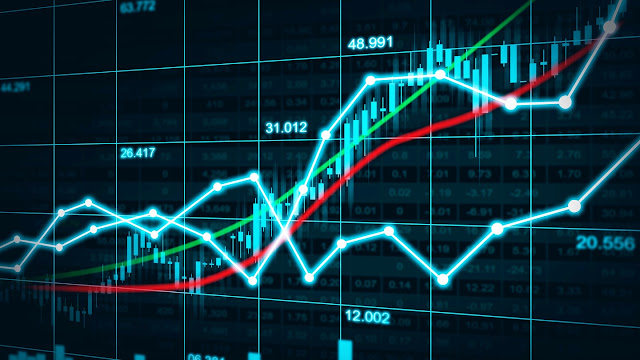 When trading the FX market, one of the most important facts to remember is that the price action of each currency pair is not mutually exclusive. In many cases, foreign economic conditions, interest rates, and price changes affect much more than just a single pairing. Everything is interrelated in the forex market to some extent, and knowing the direction and how strong this relationship is can be used to develop effective trading strategies and has the potential to be a great trading tool. The bottom line is that unless you only want to trade one currency pair at a time, it is extremely important to take into account how different currency pairs move relative to one another. To do this, we can use correlation analysis.

Correlations are calculations based on pricing data, and these numbers can help gauge the relationships that exist between different currency pairs. The information that the numbers give us can be a good aid for any traders who want to diversify their portfolios, double up on positions without investing in the same currency pair, or just get an idea of how much risk their trades are opening them up to. If used correctly, this method has the potential to maximize gains, gauge exposure, and help prevent counterproductive trading.

Knowing how closely correlated the currency pairs are in your portfolio is a great way to measure your exposure and risk. You might think that you’re diversifying your portfolio by investing in different pairs, but many of them have a tendency to move in the same or opposite direction to one another. The correlations between pairs can be strong or weak and last for weeks, months, or even years. Basically, what a correlation number gives us is an estimate of how closely pairs move together or how opposite their actions are over a specified period of time. Any correlation calculation will be in decimal form; the closer the number is to 1, the stronger the connection between the two currencies. For example, by looking at the sample data we can see a +0.83 correlation between the USD/JPY and the USD/CHF currency pairs over the past month. If you are not a fan of decimals, you can also think of the number as a percentage by multiplying it by 100 percent (in this case getting a 83 percent correlation between USD/JPY and USD/CHF).

High decimals indicate currency pairs that closely mirror one another, whereas lower numbers tell us that the pairs do not usually move in a parallel fashion. Therefore, because there is a high correlation between these two currency pairs, we can see that by investing in both the USD/JPY and the USD/CHF, we are effectively doubling up on a position. Likewise, it might not be the best idea to go long one of the currency pairs and short the other, because a rally in one has a high likelihood of also setting off a rally in the other. While this would not make your profit and losses exactly zero (because they have different pip values), the two do move in such a similar fashion that taking opposing positions could take a bite out of profits or even cause losses.

Positive correlations aren’t the only way to measure similarities between pairings; negative correlations can be just as useful. In this case, instead of a very positive number, we are looking for a highly negative one. Just as on the positive side, the closer the number is to –1, the more connected the two currencies movements are, this time in the opposite direction. Let’s take a look at the EUR/USD, which has a very negative relationship with the USD/CHF. Between these two currency pairs, the correlation has been –0.83 over the past year and –0.94 over the past month. This number indicates that these two pairings have a strong propensity to move in opposite directions. Therefore, taking contrary positions on the two pairs could be the same as taking the same position on two highly positive correlated pairs. In this case, going long in one and shorting the other would be almost the same as doubling up on the position and as a result would also open your portfolio up to a higher amount of risk. However, going long or short on both at the same time would probably be counterproductive and lead to near zero profit and losses, because the two currency pairs move in opposite directions. Therefore, if one side of the trade became profitable, the other would usually result in losses.

Anyone who has ever traded the FX market knows that currencies are very dynamic; economic conditions, both sentiment and pricing, change every day. Because of this, the most important aspect to remember when analyzing currency correlations is that they can also easily change over time. The strong correlations that are calculated today might not be the same this time next month. Due to the constant reshaping of the forex environment, it is imperative to keep current if you decide to use this method for trading. For example, over a one-month period that we observed, the correlation between AUD/USD and GBP/USD was 0.08. This is a very low number and would indicate that the pairs do not really share any definitive trend in their movements. However, if we look at the three-month data for the same time period, the number increases to 0.24 and then to 0.41 for six months and finally to 0.45 for a year. Therefore, for this particular example we can see that there was a blatant recent breakdown in the relationship between these two pairs. What was once a stronger positive association in the long run has almost totally deteriorated over the short term. In contrast, the EUR/USD and AUD/USD pairing has shown a strengthening trend in the most recent data. The correlation between these two pairs started at –0.52 for the year and edged up to –0.63 for the past month.

An even more dramatic example of the extent to which these numbers can change can be found in the USD/JPY and AUD/USD pairing; there was a +0.41 correlation between the two for the yearlong data. However, while these two tended to move in reasonably similar directions in the long term, over the month of April 2008 they were actually negatively correlated with a –0.30 reading. The major events that change the degree and even direction that pairs are correlated are usually associated with the economic developments and market sentiment at the time.

Because correlations have a tendency to shift over time, the best way to keep current on the direction and strength of your pairings is to calculate them yourself. Although it might seem like a tricky concept, the actual process can be made quite easy. The simplest way to calculate the numbers is to use Microsoft Excel. In Excel, you can take the currency pairs that you want to derive a correlation from over a specific time period and just use the correlation function. Taking the one-year, six-month, three-month, and one-month trailing readings gives the most comprehensive view of the similarities and differences between pairs; however, you can decide which or how many of these readings you want to analyze. Breaking down the process step-by-step, we’ll find the correlation between the USD/GBP and the USD/CHF.

First you’ll need to get the pricing data for the two pairings. To keep organized, label one column GBP and the other CHF and then put in the weekly values of these currencies using the last price and pairing them with the USD for whatever time period you want to use. At the bottom of the two columns, go to an empty slot and type in =CORREL. Highlight all of the data in one of the pricing columns, type in a comma, and then do the same thing for the other currency; the number produced is your correlation. Although it is not necessary to update your numbers every day, updating them once every couple of weeks or at the very least once a month is generally a good idea. 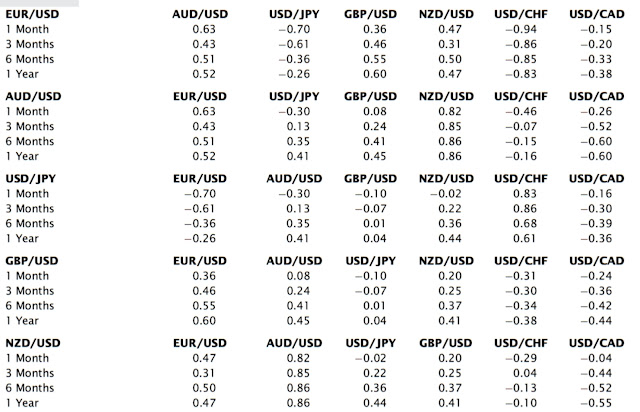