WHAT ARE THE BEST TIMES TO TRADE FOR INDIVIDUAL CURRENCY PAIRS?

By rahul roy - July 24, 2019
WHAT ARE THE BEST TIMES TO
TRADE FOR INDIVIDUAL
CURRENCY PAIRS? 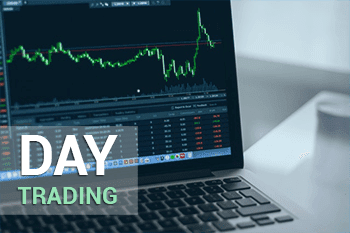 New York is the second largest FX marketplace, encompassing 19 percent of total FX market volume turnover according to the 2004 Triennial Central Bank Survey of Foreign Exchange and Derivatives Market Activity in April 2004, published by the Bank for International Settlements (BIS). It is also the financial center that guards the back door of the world’s FX market as trading activity usually winds down to a minimum from its afternoon session until the opening of the Tokyo market the next day. The majority of the transactions during the U.S. session are executed between 8 a.m. and noon, a period with high liquidity because European traders are still in the market.

For the more risk-tolerant traders, GBP/USD, USD/CHF, GBP/JPY, and GBP/CHF are good choices for day traders since the daily ranges average about 120 pips. (See Figure 5.2.) Trading activities in these currency pairs are particularly active because these transactions directly involve the U.S. dollar. When the U.S. equity and bond markets are open during the U.S. session, foreign investors have to convert their domestic currency, such as the Japanese yen, the euro, and the Swiss franc, into dollar-dominated assets in order to carry out their transactions. With the market overlap, GBP/JPY and GBP/CHF have the widest daily ranges. 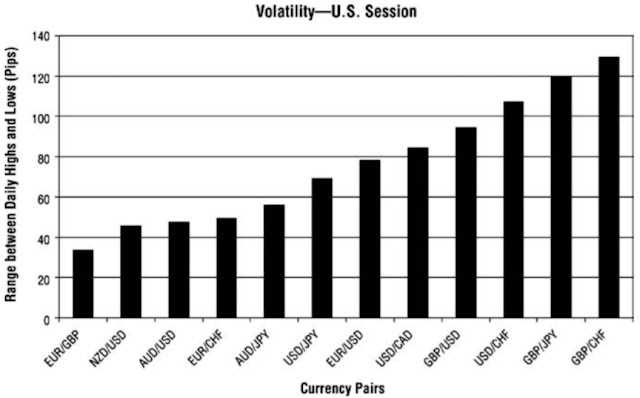 Most currencies in the FX market are quoted with the U.S. dollar as the base and primarily traded against it before translating into other currencies. In the GBP/JPY case, for a British pound to be converted into Japanese yen, it has to be traded against the dollar first, then into yen. Therefore, a GBP/JPY trade involves two different currency transactions, GBP/USD and USD/JPY, and its volatility is ultimately determined by the correlations of the two derived currency pairs. Since GBP/USD and USD/JPY have negative correlations, which means their direction of movements are opposite to each other, the volatility of GBP/JPY is thus amplified. USD/CHF movement can also be explained similarly but has a greater intensity. Trading currency pairs with high volatility can be very lucrative, but it is also important to bear in mind that the risk involved is very high as well. Traders should continuously revise their strategies in response to market conditions because abrupt movements in exchange rates can easily stop out their trading orders or nullify their long-term strategies.

For the more risk-averse traders, USD/JPY, EUR/USD, and USD/CAD appear to be good choices since these pairs offer traders a decent amount of trading range to garner handsome profits with a smaller amount of risk. Their highly liquid nature allows an investor to secure profits or cut losses promptly and efficiently. The modest volatility of these pairs also provides a favorable environment for traders who want to pursue long-term strategies.

London is the largest and most important dealing center in the world, with a market share at more than 30 percent according to the BIS survey. Most of the dealing desks of large banks are located in London; the majority of major FX transactions are completed during London hours due to the market’s high liquidity and efficiency. The vast number of market participants and their high transaction value make London the most volatile FX market of all. Half of the 12 major pairs surpass the 80 pips line, the benchmark that we used to identify volatile pairs with GBP/JPY and GBP/CHF reaching as high as 140 and 146 pips respectively.

GBP/JPY and GBP/CHF are apt for the risk lovers. These two pairs have an average daily range of more than 140 pips and can be used to generate a huge amount of profits in a short period of time. Such high volatility for the two pairs reflects the peak of daily trade activity as large participants are about to complete their cycle of currency conversion around the 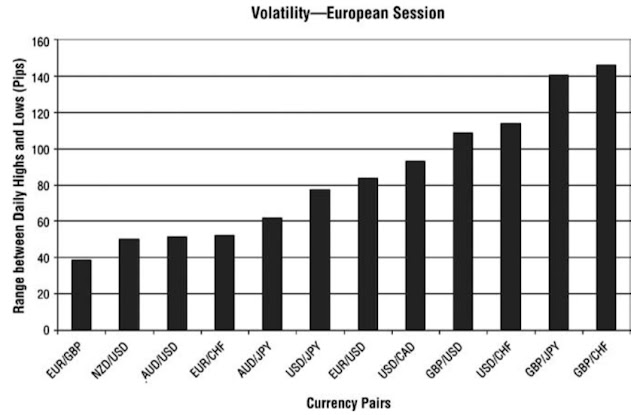 world. London hours are directly connected to both the U.S. and the Asian sessions; as soon as large banks and institutional investors are finished repositioning their portfolios, they will need to start converting the  European assets into dollar-denominated ones again in anticipation of the opening of the U.S. market. The combination of the two reconversions by the big players is the major reason for the extremely high volatility in the pairs.

For the more risk-tolerant traders, there are plenty of pairs to choose from. EUR/USD, USD/CAD, GBP/USD, and USD/CHF, with an average range of 100 pips, are ideal picks as their high volatilities offer an abundance of opportunity to enter the market. As mentioned earlier, trade between the European currencies and the dollar picks up again because the large participants have to reshuffle their portfolios for the opening of the U.S. session.

For the more risk-averse participants, the NZD/USD, AUD/USD, EUR/CHF, and AUD/JPY, with an average of about 50 pips, are good choices as these pairs provide traders with high interest incomes in additional to potential trade profits. These pairs allow investors to determine their direction of movements based on fundamental economic factors and be less prone to losses due to intraday speculative trades.

The trade intensity in the European–Asian overlap is far lower than in any other session because of the slow trading during the Asian morning. Of course, the time period surveyed is relatively smaller as well. With trading extremely thin during these hours, risk-tolerant and risk-loving traders can take a two-hour nap or spend the time positioning themselves for a breakout move at the European or U.S. open. 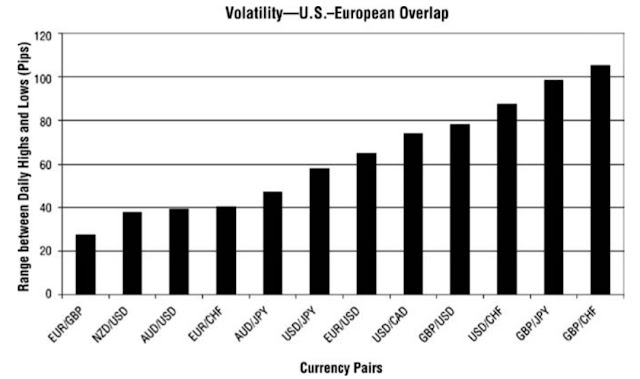 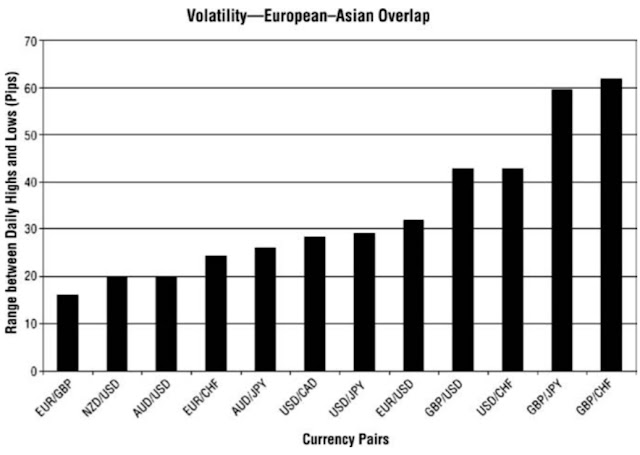