SEASONALITY--HOW IT APPLIES TO THE FX MARKET 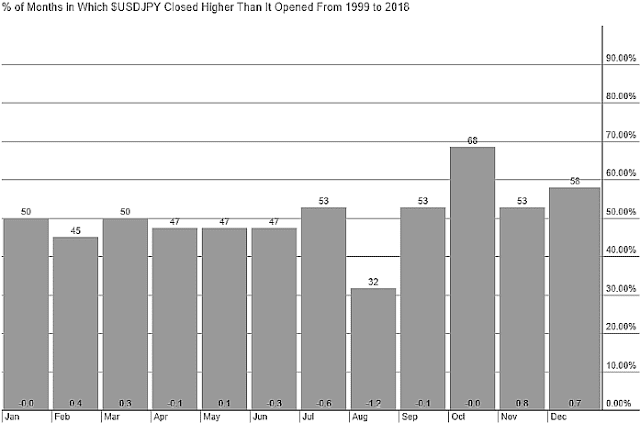 Most traders attempt to analyze the future direction of currencies by using either fundamental or technical analysis—or if they’re feeling particularly crafty, a combination of both. However, many traders may not realize that the clearest way to analyze past price behavior may be to look at the price activity itself, without the noise of the indicators. One way to do this is through seasonality.

Stock traders may be very familiar with the concept of seasonality, because one of the most famous cases of seasonality is the January effect in equities. First identified in 1942, it was publicized by Robert A. Haugen and Josef Lakonishok in 1992 through their book The Incredible January Effect: The Stock Market’s Unsolved Mystery (Irwin Professional Pub., 1987). The theory behind the January effect is that stocks perform particularly well in the period between the last day of December and the fifth trading day of January. The reason for this historically spectacular performance is the reversal of year-end flows. When a fiscal year comes to a close, many investors may cash in on their stocks to create tax losses and to recognize their capital gains, while some corporations may do similar things to window-dress their balance sheets. The January effect is not the only case of seasonality in stocks. Another pattern, known as the Mark Twain effect, refers to stock returns being particularly weak in the month of October. The name of the effect comes from a quote in Mark Twain’s Pudd’nhead Wilson novel: “October. This is one of the peculiarly dangerous months to speculate in stocks. The others are July, January, September, April, November, May, March, June, December, August, and February.”

Seasonality, which is defined as a pattern that occurs at given times within a calendar year, is not unique to the equity market. Unsurprisingly, it occurs in the currency market as well. As in stocks, the most obvious case of seasonality is in the month of January. This makes sense because when foreign investors reinitiate some of their equity market positions in the month of January, they will usually need to convert their local currencies into U.S. dollars. With that in mind, however, not all currency pairs are created equal; therefore, the U.S. dollar may see a stronger case of seasonality against some currencies than against others.

At the end of 2007, I conducted a seasonality study for the month of January. The study measures the change between the price of a currency pair at the beginning of the month and at the end of the month for the past 11 years (1997 to 2007). According to the data, the strongest case of seasonality was in the EUR/USD and USD/CHF. 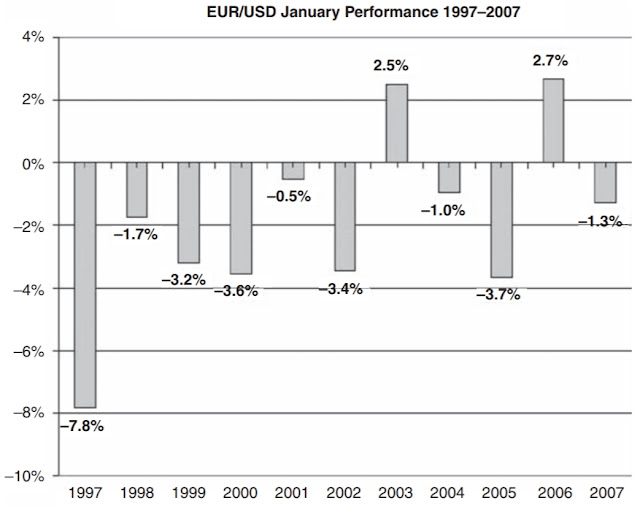 The U.S. dollar rose against the euro nine out of the past 11 years or 81.8 percent of the time between January 1 and January 31 (synthetic euro prices were used prior to the euro’s launch in January 1999). The biggest percentage loss was in 1997, when the EUR/USD dropped 7.8 percent, while the average loss, including the two up years in 2003 and 2006, was –1.9 percent. Looking a little further back, the average loss between 1979 and 2007 was –1.2 percent. Beginning-of-theyear positioning is the primary reason for this strong case of seasonality, and even though it does not happen 100 percent of the time, the fact that it has happened 81.8 percent of the time makes it statistically significant. Keeping on top of seasonality helps traders focus on strategies where probabilities are in their favor.

We see a similar case of January seasonality in USD/CHF. The U.S. dollar also rose against the Swiss franc nine out of the past 11 years or 81.8 percent of the time between January 1 and January 31. The correlation between the EUR/USD and USD/CHF data is unsurprising given that these two currency pairs typically move in opposite directions. The biggest percentage gain in the dollar was also in 1997 when the currency pair rallied 6.1 percent. The biggest percentage loss was in 2006 when the currency pair dropped 2.7 percent. Including the two years when USD/CHF declined, on average the currency pair rose 2.1 percent in the month of January between 1997 and 2007. Looking a little further back, the average gain between 1979 and 2007 was 2.0 percent. 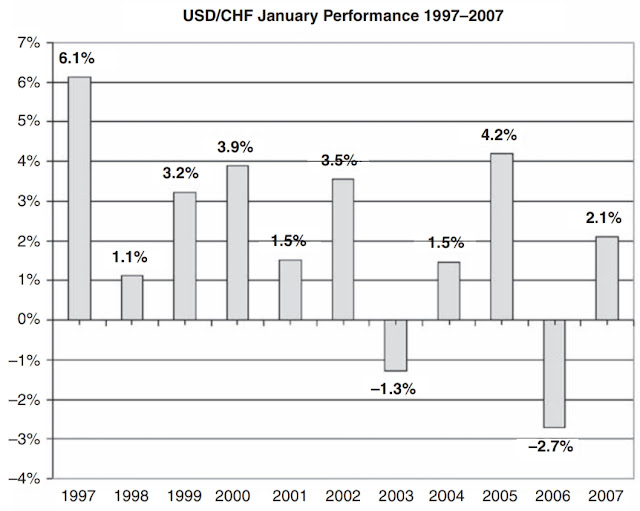 The seasonality in USD/JPY for the month of January is slightly less than the seasonality in the EUR/USD or USD/CHF. The U.S. dollar rose against the Japanese yen eight out of the past 11 years or 72.7 percent of the time between January 1 and January 31. The biggest percentage gain was in 2000 when the currency pair rallied 4.9 percent. The biggest percentage loss was in 1998 when the currency pair dropped 2.8 percent. Including the three years when USD/JPY dropped, on average the currency pair rose 1.3 percent in the month of January between 1997 and 2007. Looking a little further back, the average gain between 1979 and 2007 was 1.04 percent. Part of the reason why the seasonality may not be as strong in USD/JPY is because Japan has a different fiscal year-end than the United States. Japan’s fiscal year-end is in March, which means there may be less window dressing by Japanese corporations during the month of January. 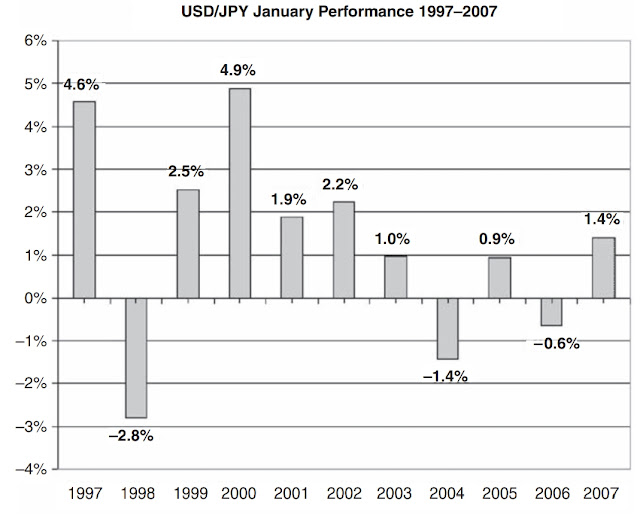 Aside from the EUR/USD, USD/CHF, and USD/JPY, there really is no seasonality in the other major currency pairs. Over the past 11 years, for example, the U.S. dollar climbed against the British pound, Australian dollar, and Canadian dollar six times, which is 54 percent of the sample, while it rose against the New Zealand dollar five times, which is 45 percent of the sample. These numbers are not statistically significant, which is why the seasonality for those currencies is essentially nonexistent.

July and August are the peak months of summer in the northern hemisphere. For the currency markets, the summer usually brings less volatile price action as many traders focus on enjoying their vacations. Interestingly enough, these two months also have a unique case of seasonality for USD/JPY and USD/CAD. In both currency pairs, the dollar tends to rise in the month of July and give back its gains in the month of August. 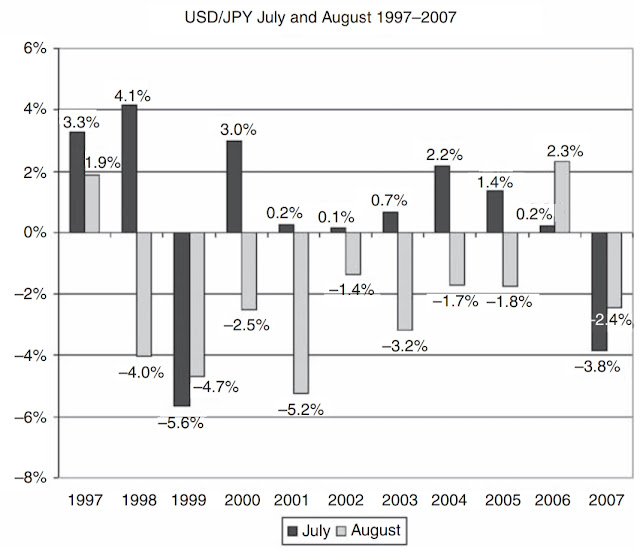 Between 1997 and 2007, USD/JPY rose in July in nine out of 11 years, with the biggest gain in 1998 and the biggest loss in 1999. On average, over the past 11 years, USD/JPY has increased 0.5 percent in the month of July. In August, however, we see that the currency pair dropped nine out of 11 years, with the biggest loss in 2001, when USD/JPY dropped 5.2 percent in one month. As indicated by the chart, the move in August was typically larger than the move in July, with the average loss being –2.1 percent during this period.

The seasonality is also very significant in USD/CAD. Including the three negative months, USD/CAD increased 1.5 percent during that period. What is most interesting about the data is the fact that the decline in USD/CAD in 1997, 2004, and 2005 was very small. Therefore, it may be a relatively low-risk bet that USD/CAD will continue to appreciate in the years ahead in the month of July. August, however, is slightly different. The U.S. dollar dropped against the Canadian dollar eight out of the past 11 years, but in the three years that the currency pair rallied, the moves were comparatively significant. Nonetheless, the probability is still skewed toward weakness for USD/CAD in the eighth month of the year, with the average loss being –0.7 percent.

There are many reasons to explain this seasonality, and one of them may be tourism. According to 2007 data from the Governmental Office of Travel and Tourism Industries, Canada is the number-one touristgenerating country for the United States, followed by Mexico, the United Kingdom, and Japan. Given that summer is often the time of year that many people choose to go on vacations, the performance of the U.S. dollar in August may be reflection of travel trends.

The U.S. dollar also tends to strengthen against the Australian and New Zealand dollars in 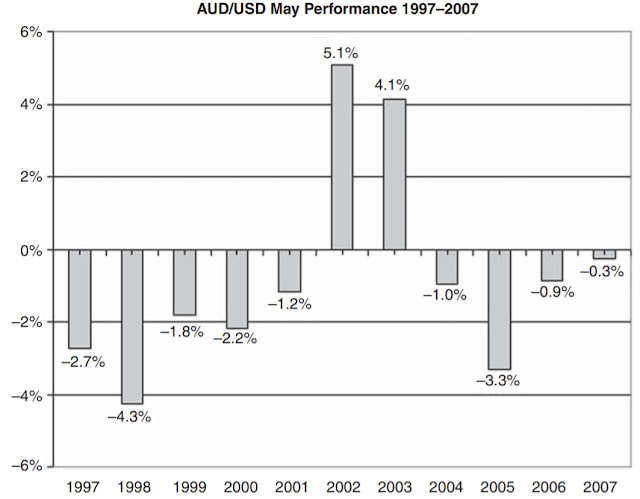 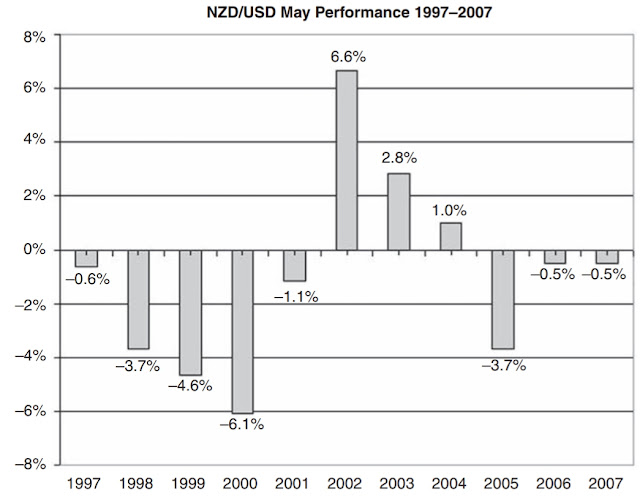 A strong case of seasonality can also be seen in the USD/CHF and the GBP/USD in the month of September. The dominant trend during that month is dollar weakness, and for both currency pairs, the dollar weakened nine out of the past 11 years. It is also most likely not a coincidence that the two years the dollar strengthened (2005 and 2006) are the same for both currency pairs. There is some seasonality in the EUR/USD as well, but it is not as significant: In the month of September, the dollar fell against the euro eight out of the past 11 years. 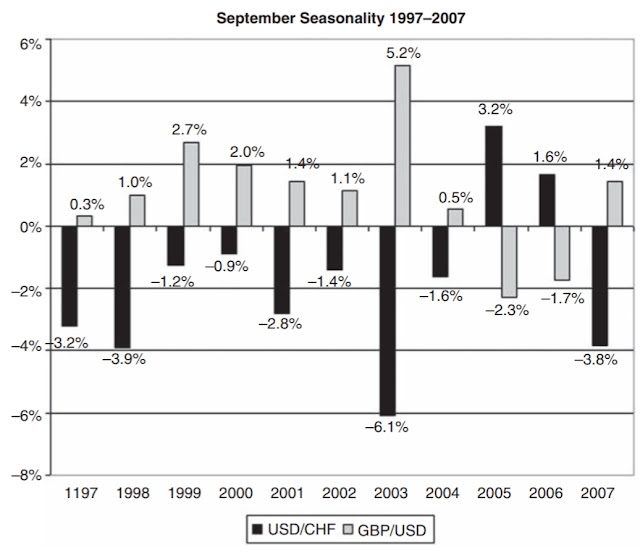 The final case of strong seasonality can be found in the month of November. Although not as statistically significant as the seasonality in the months of May and September, the New Zealand dollar has managed to appreciate against the U.S. dollar eight out of the past 11 years. On average, the appreciation was 1.9 percent, which for the most part is fairly significant.

The best way to incorporate seasonality into your FX trading is to be simply mindful of it. For example, it may be better to look for opportunities to buy the NZD/USD in the month of November than to sell it. Seasonal trades do not always duplicate themselves, which is why trading seasonality blindly by buying at the beginning of the month and selling it at the end of the month may not be the best thing to do, but what seasonality does teach us is where the probabilities are skewed. 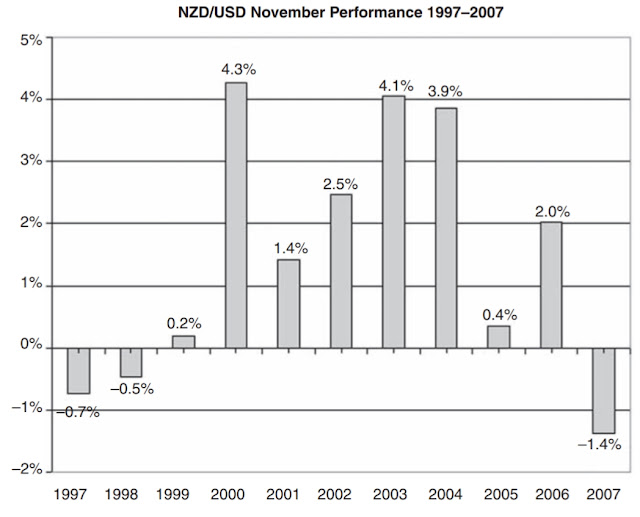