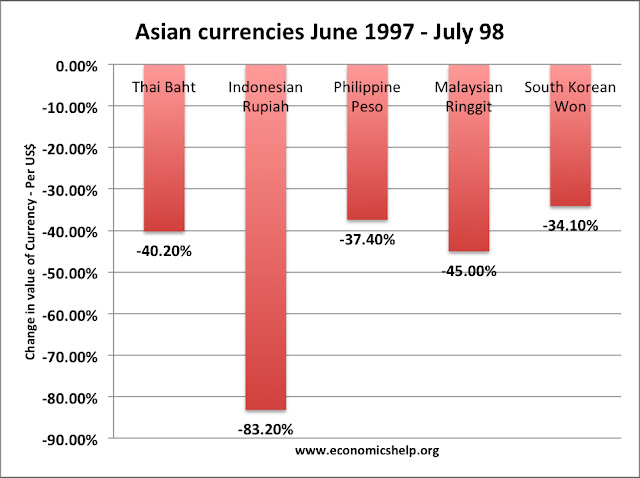 Falling like a set of dominos on July 2, 1997, the relatively nascent Asian tiger economies created a perfect example in showing the interdependence of global capital markets and their subsequent effects throughout international currency forums. Based on several fundamental breakdowns, the cause of the contagion stemmed largely from shrouded lending practices, inflated trade deficits, and immature capital markets. Added together, the factors contributed to a “perfect storm” that left major regional markets incapacitated and once-prized currencies devalued to significantly lower levels. With adverse effects easily seen in the equities markets, currency market fluctuations were negatively impacted in much the same manner during this time period.

Leading up to 1997, investors had become increasingly attracted to Asian investment prospects, focusing on real estate development and domestic equities. As a result, foreign investment capital flowed into the region as economic growth rates climbed on improved production in countries like Malaysia, the Philippines, Indonesia, and South Korea. Thailand, home of the baht, experienced a 13 percent growth rate in 1988 (falling to 6.5 percent in 1996). Additional lending support for a stronger economy came from the enactment of a fixed currency peg to the more formidable U.S. dollar. With a fixed valuation to the greenback, countries like Thailand could ensure financial stability in their own markets and a constant rate for export trading purposes with the world’s largest economy. Ultimately, the region’s national currencies appreciated as underlying fundamentals were justified, and speculative positions in expectation of further climbs in price mounted.

However, in early 1997, a shift in sentiment had begun to occur as international account deficits became increasingly difficult for respective governments to handle and lending practices were revealed to be detrimental to the economic infrastructure. In particular, economists were alerted to the fact that Thailand’s current account deficit had ballooned in 1996 to $14.7 billion (it had been climbing since 1992). Although comparatively smaller than the U.S. deficit, the gap represented 8 percent of the country’s gross domestic product. Shrouded lending practices also contributed heavily to these breakdowns, as close personal relationships of borrowers with high-ranking banking officials were well rewarded and surprisingly common throughout the region. This aspect affected many of South Korea’s highly leveraged conglomerates as total nonperforming loan values sky-rocketed to 7.5 percent of gross domestic product.

Additional evidence of these practices could be observed in financial institutions throughout Japan. After announcing a $136 billion total in questionable and nonperforming loans in 1994, Japanese authorities admitted to an alarming $400 billion total a year later. Coupled with a then crippled stock market, cooling real estate values, and dramatic slowdowns in the economy, investors saw opportunity in a depreciating yen, subsequently adding selling pressure to neighbor currencies. When Japan’s asset bubble collapsed, asset prices fell by $10 trillion, with the fall in real estate prices accounting for nearly 65 percent of the total decline, which was worth two years of national output. This fall in asset prices sparked the banking crisis in Japan. It began in the early 1990s and then developed into a full-blown systemic crisis in 1997 following the failure of a number of high-profile financial institutions. In response, Japanese monetary authorities warned of potentially increasing benchmark interest rates in hopes of defending the domestic currency valuation. Unfortunately, these considerations never materialized and a shortfall ensued. Sparked mainly by an announcement of a managed float of the Thai baht, the slide snowballed as central bank reserves evaporated and currency price levels became unsustainable in light of downside selling pressure.

Following mass short speculation and attempted intervention, the aforementioned Asian economies were left ruined and momentarily incapacitated. The Thailand baht, once a prized possession, was devalued by as much as 48 percent, even slumping closer to a 100 percent fall at the turn of the New Year. The most adversely affected was the Indonesian rupiah. Relatively stable prior to the onset of a “crawling peg” with the Thai baht, the rupiah fell a whopping 228 percent from its previous high of 12,950 to the fixed U.S. dollar. These particularly volatile price actions are reflected. Among the majors, the Japanese yen fell approximately 23 percent from its high to its low against the U.S. dollar in 1997 and 1998.

The financial crisis of 1997–1998 revealed the interconnectivity of economies and their effects on the global currency markets. Additionally, it showed the inability of central banks to successfully intervene in currency valuations when confronted with overwhelming market forces along with the absence of secure economic fundamentals. Today, with the assistance 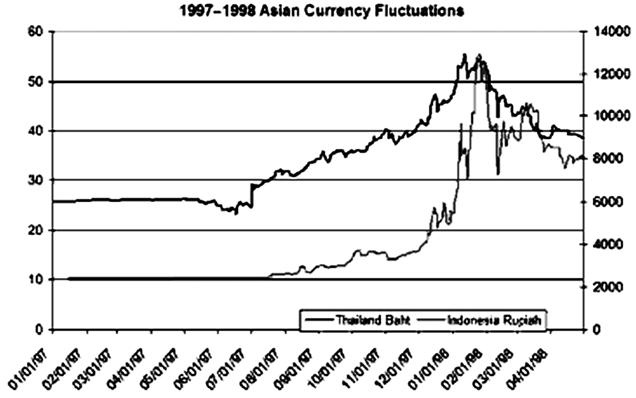 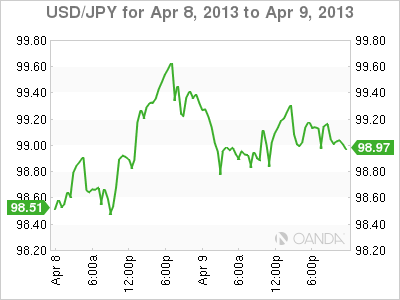 of IMF reparation packages and the implementation of stricter requirements, Asia’s four little dragons are churning away once again. With inflationary benchmarks and a revived exporting market, Southeast Asia is building back its once prominent stature among the world’s industrialized economic regions. With the experience of evaporating currency reserves under their belts, the Asian tigers now take active initiatives to ensure that they have a large pot of reserves on hand in case speculators attempt to attack their currencies once again.