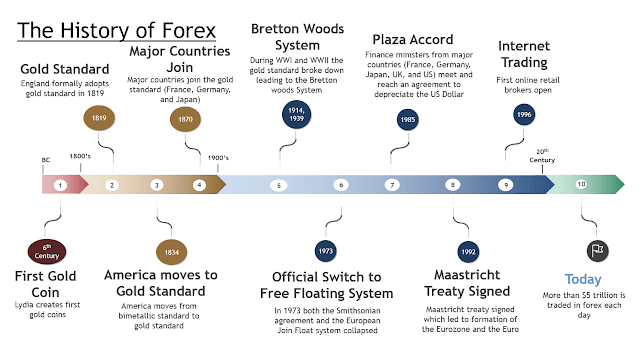 After the demise of all the various exchange rate regulatory mechanisms that characterized the twentieth century—the gold standard, the Bretton Woods standard, and the Smithsonian Agreement—the currency market was left with virtually no regulation other than the mythical “invisible hand” of free market capitalism, one that supposedly strived to create economic balance through supply and demand. Unfortunately, due to a number of unforeseen economic events—such as the Organization of Petroleum Exporting Countries (OPEC) oil crises, stagflation throughout the 1970s, and drastic changes in the U.S. Federal Reserve’s fiscal policy—supply and demand, in and of themselves, became insufficient means by which the currency markets could be regulated. A system of sorts was needed, but not one that was inflexible. Fixation of currency values to a commodity, such as gold, proved to be too rigid for economic development, as was also the notion of fixing maximum exchange rate fluctuations. The balance between structure and rigidity was one that had plagued the currency markets throughout the twentieth century, and while advancements had been made, a definitive solution was still greatly needed.

And hence in 1985, the respective ministers of finance and central bank governors of the world’s leading economies—France, Germany, Japan, the United Kingdom, and the United States—convened in New York City with the hopes of arranging a diplomatic agreement of sorts that would work to optimize the economic effectiveness of the foreign exchange markets. Meeting at the Plaza Hotel, the international leaders came to certain agreements regarding specific economies and the international economy as a  whole.

Across the world, inflation was at very low levels. In contrast to the stagflation of the 1970s—where inflation was high and real economic growth was low—the global economy in 1985 had done a complete 180-degree turn, as inflation was now low but growth was strong.

While low inflation, even when coupled with robust economic growth, still allowed for low interest rates—a circumstance developing countries particularly enjoyed—there was an imminent danger of protectionist policies like tariffs entering the economy. The United States was experiencing a large and growing current account deficit, while Japan and Germany were facing large and growing surpluses. An imbalance so fundamental in nature could create serious economic disequilibrium, which in turn would result in a distortion of the foreign exchange markets and thus the international economy.

The results of current account imbalances, and the protectionist policies that ensued, required action. Ultimately, it was believed that the rapid acceleration in the value of the U.S. dollar, which appreciated more than 80 percent against the currencies of its major trading partners, was the primary culprit. The rising value of the U.S. dollar helped to create enormous trade deficits. A dollar with a lower valuation, on the other hand, would be more conducive to stabilizing the international economy, as it would naturally bring about a greater balance between the exporting and importing capabilities of all countries.

At the meeting in the Plaza Hotel, the United States persuaded the other attendees to coordinate a multilateral intervention, and on September 22, 1985, the Plaza Accord was implemented. This agreement was designed to allow for a controlled decline of the dollar and the appreciation of the main antidollar currencies. Each country agreed to changes to its economic policies and to intervene in currency markets as necessary to get the dollar down. The United States agreed to cut its budget deficit and to lower interest rates. France, the United Kingdom, Germany, and Japan all agreed to raise interest rates. Germany also agreed to institute tax cuts while Japan agreed to let the value of the yen “fully reflect the underlying strength of the Japanese economy.” However, the problem with the actual implementation of the Plaza Accord was that not every country adhered to its pledges. The United States in particular did not follow through with its initial promise to cut the budget deficit. Japan was severely hurt by the sharp rise in the yen, as its exporters were unable to remain competitive overseas, and it is argued that this eventually triggered a 10-year recession in Japan. The United States, in contrast, enjoyed considerable growth and price stability as a result of the agreement.

The effects of the multilateral intervention were seen immediately, and within two years the dollar had fallen 46 percent and 50 percent against the deutsche mark (DEM) and the Japanese yen (JPY), respectively. The U.S. economy became far more export-oriented as a result, while other industrial countries like Germany and Japan assumed the role of importing. This gradually resolved the current account deficits for the time being, and also ensured that protectionist policies were minimal and nonthreatening. But perhaps most importantly, the Plaza Accord cemented the role of the central banks in regulating exchange rate movement: yes, the rates would not be fixed, and hence would be determined primarily by supply and demand; but ultimately, such an invisible hand is insufficient, and it was the 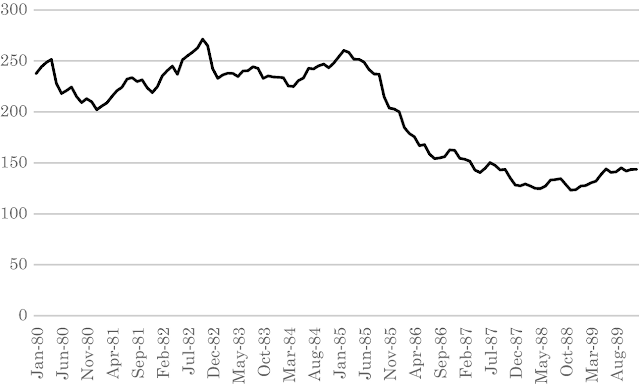 right and responsibility of the world’s central banks to intervene on behalf of the international economy when necessary.