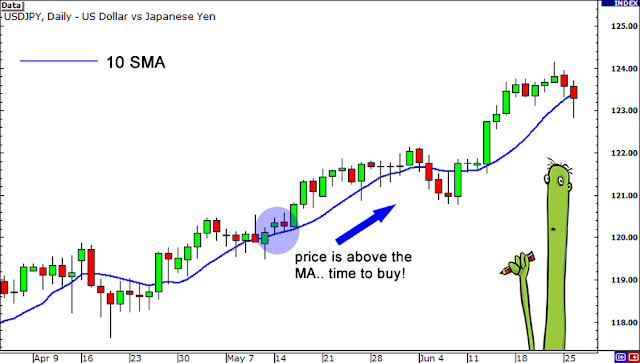 One of the most common and familiar trend-following indicators is the moving averages. They smooth a data series and make it easier to spot trends, something that is especially helpful in volatile markets. They also form the building blocks for many other technical indicators and overlays.The two most popular types of moving averages are the Simple Moving Average (SMA) and
the Exponential Moving Average (EMA). They are described in more detail below.

For example, a 10-period EMA’s Multiplier is calculated like this.

A price break upwards through an MA is generally a buy signal, and a price break downwards through an MA is generally a sell signal. As we have seen, the longer the time span or period covered by an MA, the greater the signifi cance of a crossover signal. If the MA is fl at or has already changed direction, its violation is fairly conclusive proof that the previous trend has reversed.

False signals can be avoided by using a filtering mechanism. Many traders, for example, recommend waiting for one period - that is one day for daily data and one week for weekly data. Whenever possible try to use a combination of signals. MA crossovers that take place at the same time as trend line violations or price pattern signals often provide strong confirmation.