FOREX MARKET AT THE BEGGINING

FOREX MARKET  AT THE BEGINNING Forex Is a Game

It begins by describing the total daily turnover and the seven major currency pairs. It then explains how to read a forex quote and how prices move. The chapter ends with a framework of how margin and leverage are employed in a forex trade.

focuses on how money is made in a forex trade. We learn about long and short and the three points in every trade. We then move to the four big reasons that cause currencies to move and get a grasp of the fraction theory.

the six major players in the forex market and the numerous advantages associated with trading the market. Some of the major players include central banks, commercial banks, multinational companies, and retail traders. We also get a glimpse of three of the biggest blow-ups in proprietary trading in banking history.

discovering your unique profile in trading. It includes a profiling test to help you find out how your personality can help or hurt your trading style. There are essentially five types of traders: scalper, day trader, swing trader, position trader, and mechanical trader. By the end of this chapter, you will know which group you belong to.

The forex game has changed much over the years. Today, it is undisputedly the largest financial market in the world, with a daily trading volume in excess of USD4 trillion. The authoritative source on global forex market activity is the Triennial Central Bank Survey of Foreign Exchange and Derivatives Market Activity, published by the Bank for International Settlements (BIS). Available official figures for daily forex turnover are taken from the last survey done in April 2010. Fifty-three central banks and monetary authorities participated in the survey, collecting information from 1,309 market participants.

At the heart of the report, an interesting fact stood out. Apparently, 48% of the growth was in spot transactions, which represented 37% of the total turnover of forex transactions worldwide. Spot transactions are mostly traded by retail traders—that ’s everyday people like you and me. This group is rapidly expanding and is expected to contribute an even larger portion of total forex turnover by the time the next survey is out. This Triennial Survey is done once every three years, and the next one is due in April 2013. Publication of preliminary results will follow four months later. The official figure for daily forex turnover is expected to be well over USD4 trillion at that time. Figure 1.1 shows the breakdown of the daily turnover by instrument.

The USD4 trillion daily turnover on the forex market is truly staggering. According to the April 2010 BIS Triennial Survey, this figure is:


In fact, in the latest BIS Quarterly Review , dated March 2012, Morten Bech, senior economist in the Monetary and Economics Department of BIS, estimated that “global FX activity was around $4.7 trillion a day on average in October 2011, compared with $4.0 trillion reported by the latest triennial central bank survey of foreign exchange activity conducted in April 2010.” Imagine that: USD4.7 trillion in a day on average in October 2011! It certainly won ’t be surprising to see the figure top the USD5 trillion mark when the official figures are released from the April 2013 survey. The good news for the retail trader is this: As a result of increasing demand, transaction costs such as spreads have decreased, technology offerings have improved, and value-added services on forex brokerage firms have exploded.

There truly never has been a better time to start trading on the forex market. This exciting message is further reinforced by the record numbers of everyday folks—people like you and me—who continue to jump onboard the forex bandwagon at an accelerated pace.


FOREX AND THE EIGHT MAJORS

Foreign exchange, or forex for short, is a market where one currency is exchanged for another. This is the reason why forex is quoted in currency pairs. Each world currency is given a three-letter code as set out by the International Standards Organization (ISO) and governed by the ISO 4217.

The eight most commonly traded currencies are:


These seven major currency pairs are: 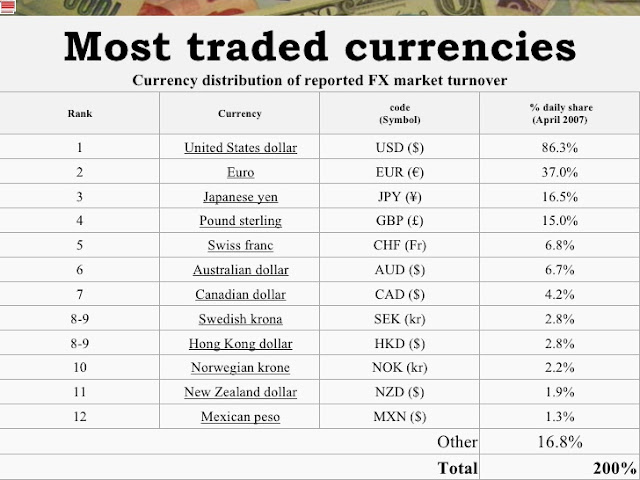 Risks by the foreign exchange on Forex

As it was mentioned above the trading on the Forex is essentially risk-bearing. By the evaluation of the grade of a possible risk accounted should be the following kinds of it: exchange rate risk, interest rate risk, and credit risk, country risk.

Exchange rate risk is the effect of the continuous shift in the worldwide market supply and demand balance on an outstanding foreign exchange position. For the period it is outstanding, the position will be subject to all the price changes.
The most popular measures to cut losses short and ride profitable positions that losses should be kept within manageable limits are the position limit and the loss limit. By the position limitation a maximum amount of a certain currency a trader is allowed to carry at any single time during the regular trading hours is
to be established. The loss limit is a measure designed to avoid unsustainable losses made by traders by means of stop-loss levels setting.

Interest rate risk refers to the profit and loss generated by fluctuations in the
forward spreads, along with forward amount mismatches and maturity gaps among transactions in the foreign exchange book. This risk is pertinent to currency swaps, forward outright, futures, and options (See below). To minimize interest rate risk, one sets limits on the total size of mismatches. A common approach is to separate the mismatches, based on their maturity dates, into up to six months and past six months. All the transactions are entered in computerized systems in order to calculate the positions for all the dates of the delivery, gains and losses. Continuous analysis of the interest rate environment is necessary to forecast any changes that may impact on the outstanding gaps.

Credit risk refers to the possibility that an outstanding currency position may not be repaid as agreed, due to a voluntary or involuntary action by a counter party. In these cases, trading occurs on regulated exchanges, such as the clearinghouse of Chicago. The following forms of credit risk are known:

when counter parties of the failed bank find their books are subjected to the danger not to get refunds from the bank, where appropriate accounts became unbalanced.

occurs because of the time zones on different continents. Consequently, currencies may be traded at the different price at different times during the trading day. Australian and New Zealand dollars are credited first, then Japanese yen, followed by the European currencies and ending with the U.S. dollar. Therefore, payment may be made to a party that will declare insolvency (or be declared insolvent) immediately after, but prior to executing its own payments. Therefore in assessing the credit risk, end users must consider not only the market value of their currency portfolios, but also the potential exposure of these portfolios. The potential exposure may be determined through probability analysis over the time to maturity of the outstanding position. The
computerized systems currently available are very useful in implementing credit risk policies. Credit lines are easily monitored. In addition, the matching systems introduced in foreign exchange since April 1993 are used by traders for credit policy implementation as well. Traders input the total line of credit for a specific
counterparty. During the trading session, the line of credit is automatically adjusted. If the line is fully used, the system will prevent the trader from further dealing with that counterparty. After maturity, the credit line reverts to its original level. 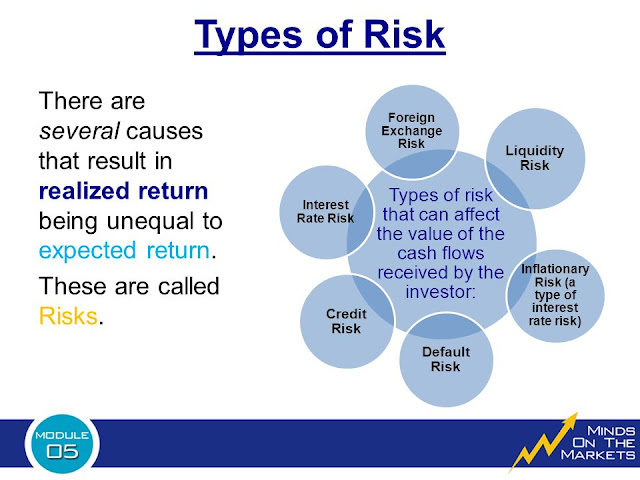 Dictatorship (sovereign) risk refers to the government's interference in the Forex
activity. Although theoretically present in all foreign exchange instruments, currency futures are, for all practical purposes, excepted from country risk, because the major currency futures markets are located in the USA. Hence, traders have to realize that kind of the risk and be in state to account possible
administrative restrictions.
forex- trading-explained forex- trading-tutorial forex-trading-for-beginners forex-wiki trading-forex-for -a-living types-of-foreign- exchange-market what-is-forex-trading-and -how-does-it-work
Location: Canada