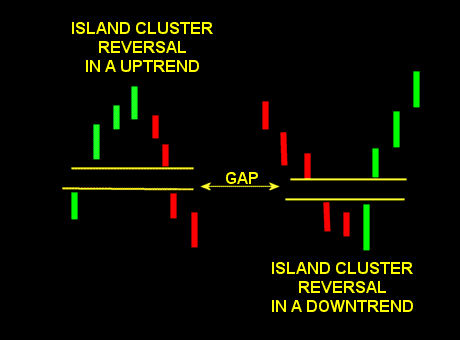 The performance of island reversals is perhaps surprising only for its mediocrity. Failure rates for both tops and bottoms are reasonable, holding below the 20% threshold that I view as the maximum allowable for reliable formations. The average decline from an island top ranges between 17% and 23%, depending on market conditions. The range is similar to many other bearish chart patterns. However, the average rise from an island bottom is a disappointing 21% to 23%, and that is well below the 35% to 40% I like to see for bullish chart patterns.


With these mediocre performers, trading every island that you see is a way to drown in losses. You can improve performance by selecting patterns with the proper height and width characteristics for the market you are trading, as described later in this chapter. Pullbacks and throwbacks are prevalent, suggesting that the gap after the island completes closes quickly. Investors can make use of this behavior to delay their investments until the pullback or throwback completes and prices resume their breakout direction. 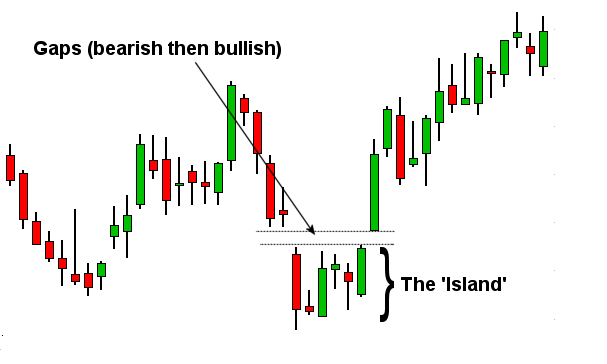 The Bullish Island Reversal is known as an island because it is on its own, some distance away from the rest of the price action. The dramatic gaps that precede and follow the candlestick’s formation point toward a strong reversal. However, before you get carried away on this island, be sure that you’ve actually spotted a Bullish Island Reversal by identifying the following criteria:

First, a clear downtrend must be in progress. Second, the price must gap down, creating an unfilled space in which no trading takes place. So the candle’s high will be below the low of the previous day. Third, that same candle must then gap back up, creating another unfilled space, which should overlap with the first gap. So its high must also be below the next day’s open. Finally, to confirm the pattern, look for the start of an uptrend after the gap up.

A Bearish Island Reversal begins with a typical uptrend. The bulls are in control, and the price gaps upward. It remains high for a day or several days. However, following this positive jump, there is an extreme change in market sentiment, causing a gap down and a downtrend. The sharp and sudden change may be prompted by a current event or news story that occurs before the market opens or after it closes.


A Bearish Island Reversal is most reliable if it occurs after a strong uptrend. The weaker the uptrend, the weaker the signal. In addition, this pattern is more dependable if the gaps (both up and down) are large. When you combine a powerful uptrend with tall gaps, the change in sentiment is both very impressive and very trustworthy.