The flag and pennant patterns are commonly found patterns in the price charts of financially traded assets stocks, bonds, futures, etc. The patterns are characterized by a clear direction of the price trend, followed by a consolidation
and range bound movement, which is then followed by a resumption of the trend.The continuation patterns which we have taken up so far in this Study  the various types of Triangles and the Rectangle have one 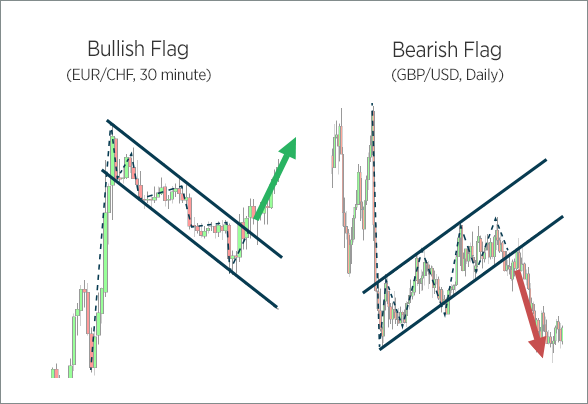 The flag pattern is encompassed by two parallel lines. These lines can be either flat or pointed in the opposite direction of the primary market trend. The pole is then formed by a line which represents the primary trend in the market. The pattern is seen as the market potentially just taking a “breather” after a big move before continuing its primary trend. The chart below illustrates.Thus, the first requirement of the Flag formation is a nearly vertical price movement on the chart, either up or down.


This is halted abruptly, usually but not always with a day of high activity, and followed by several days to a few weeks of price congestion within clearly defined parallel bounds. During this period the volume of activity tends to decline noticeably. In most cases, the parallel lines which bound the congestion slope downward if the preceding trend was up, or upward if the preceding trend was down, but they may be horizontal or even be slightly tilted in the same direction as the preceding trend. This, in an up-trend, forms the picture of a rectangular flag flying from a mast, which usually, as we should expect, hangs some- what downward of its own weight, but is occasionally blown straight out or even slightly upward by a strong breeze. 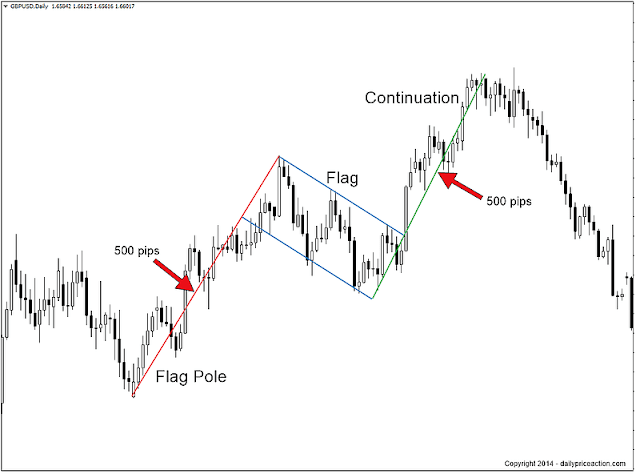 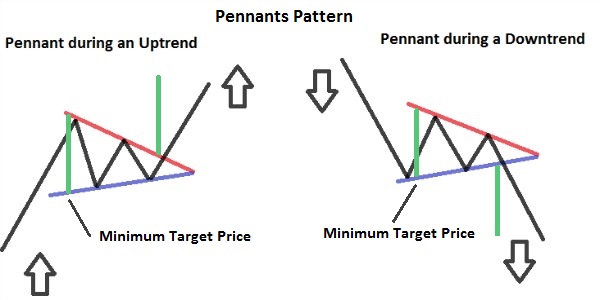 The pennant pattern is identical to the flag pattern in its setup and implications; the only difference is that the consolidation phase of a pennant pattern is characterized by converging trend lines rather than parallel trend lines. The
image below illustrates.Pennants remind me of those pointed streamers that line roped-off areas at festivals. They are the same as flags except that the trend lines bounding the pattern converge.

Th e easiest way to find a flag or pennant is to begin with the flag pole. Look for a straight-line price run. Price will consolidate along that run. When it does, it can take the shape of a flag or pennant. 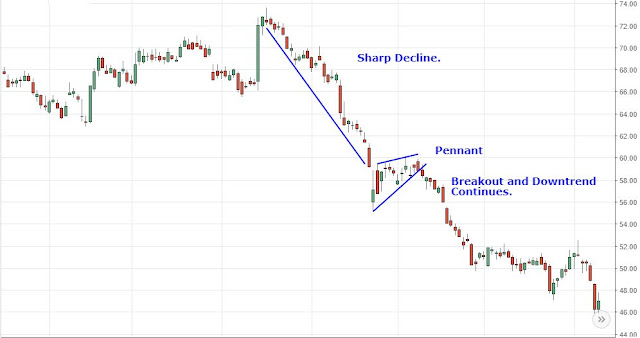